The Caribbean Economic History Association (AHEC) and the Ana G. Méndez University, Campus of Carolina convene the VI Congress in Puerto Rico, between November 1 and 4, 2021.

The main theme of the Congress will be:« Thinking the Caribbean in times of crisis.Challenges for economic history »The AHEC invites researchers who are interested in the economic history of the Caribbean, to participate with an unpublished paper in one of the following sections, trying to establish its relationship with the central theme of the call in a global context:

5. The registration that will entitle to participate in the sessions of the Congress and the affiliation to the AHEC for one year is set at 80 USD. The registration of students who accredit this condition are fixed at 40 USD. The fees will be valid until July 31, 2021.

6. Registration fees processed between August 1 and October 30, 2021 are set at 120 USD for ordinary members and 60 USD for students.

7. The registration fees paid during the Congress are set at 140 USD for ordinary members and 60 USD for students.

8. Registration fees may be paid by PayPal or else in cash at the local Secretariat of the Congress, enabled at the headquarters of its celebration during the opening date.

The seventh Latin American Congress of Economic History (VII CLADHE) will be held in the city of Lima from March 3 to 5, 2021.
The call for proposals for thematic symposia opens.

Proposals must be sent between March 2 and April 30, 2020 to the APHE email address.

More information in the document below:

This work consists of two studies: the first refers to the history of the formation of central banks and monetary policy during the long period between 1880 and 1991 and the other is about the controversy, during 1880-1910, between the finance minister Fréderic Marcelin and the French banks La Société Generale de Crédit Commercial et Industrial and La Banque de l’Union Parisienne. The two studies are inseparable from each other as they are a consequence of the same methodological perspective.

The Institute of Caribbean Studies (ICS) began the CONFERENCIAS CARIBEÑAS (CC) during the first semester of the 2007-2008 academic year. With the cycle initiated in January 2019, we celebrate our twelfth anniversary: a total of twenty-four semesters that include 295 activities. These events

comprise lectures, discussion groups, round tables, book presentations, and symposia. It is the first time in the history of the University of Puerto Rico (UPR) that an academic unit of any faculty has sponsored, for 12 consecutive academic years, such number of activities, with such variety and richness of topics, approaches, disciplines and countries.

The ICS planned the CC in a way that harmonized with the document Visión Universidad 2016: Plan Estratégico Universidad de Puerto Rico, Recinto de Río Piedras 2006-2016. The presented researches illustrate the interdisciplinary approach of the ICS, by including subjects from the Social Sciences, Humanities, Cultural Studies and Natural Sciences. In its mission to carry out, promote and disseminate research about the Caribbean, the ICS complies with offering to the academic community and the general public in and outside Puerto Rico, a plurality of areas of study that address the complexity and social heterogeneity, economic, political and cultural aspects of the region.

In addition to speakers from the academic world selected for the quality of their research, there have been, among the participants of the CC, two general secretaries of the Association of Caribbean States, Rubén Silié and Alfonso Múnera; the Assistant Secretary General of the Organization of American States, Albert Ramdin; the Prime Minister of Haiti, Jacques Edouard-Alexis; professors John Agard, Anthony Chen and Leonard Nurse, of the University of the West Indies, members of the panel awarded the Nobel Peace Prize (2007) for their work on climate change, and several distinguished professors from Caribbean, North American and European universities, such as Rebecca Scott, Norman Girvan, Robert Hill, Sidney W. Mintz, Frank Moya Pons, Consuelo Naranjo, Lizabeth Paravisini, Francisco Scarano, Stuart Schwartz, Olive Senior, Jean Stubbs, Oscar Zanetti Lecuona, among many others. The Gordon K. & Sybil Farrell Lewis Annual Keynote Conference, hosted by the Lewis Farrell Family, has allowed us to present scholars such as Verene Shepherd, Anthony P. Maingot, and Richard Price. It is worth mentioning that members of the faculty of the UPR System have had a wide participation, either as speakers or as commentators. Several speakers and commentators from abroad have participated via Skype, thus incorporating new telecommunication technologies.

Since its inception, most CC were video recorded and later digitally transmitted, first through the ICS channel on Ustream, thanks to the collaboration of Javier Almeyda Loucil (Library System UPR-RP) and later by the YouTube channel of the Río Piedras Campus. The vast majority of events have been placed on the Internet Archive [https://goo.gl/ZtctwD], and a complete collection has been donated to the Digital Library of the Caribbean (DLOC) project. This list includes direct access to the recordings.

The CCs were conducted under the direction of professors Humberto García-Muñiz (2007-2015, 2017-2019, Lowell Fiet (2015-2016), and Ana M. Fabián-Maldonado, with the participation of the teaching and administrative staff of the ICS and the support of the College of Social Sciences, the Chancellor’s Office of the Río Piedras Campus, Carmen Gloria Romero (RIP) and Almaluces Figueroa of the Caribbean Regional Library, WRTU Radio Universidad, and Ivette Romero from Repeating Islands blog.

Coordinator of the Caribbean Conferences

This book by Professor Victor Bulmer-Thomas examines the economic history of the Caribbean in the last 200 years, since the Napoleonic Wars and is the first overall analysis of the region. 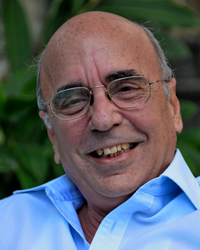 We use cookies to ensure that we give the best user experience on our website. If you continue using this site we will assume that you agree.OK!NoPrivacy Policy